Tablas Creek is the realization of the combined efforts of two of the international wine community’s leading families: the Perrin family, proprietors of Château de Beaucastel, and the Haas family of Vineyard Brands. Equally owned and run by the two families, the partnership begun in 1987 remains today as ever, even as the next generation of Haases and Perrins have stepped into leadership roles over recent decades.

The partners searched California from the foothills of the Sierras in the north to coastal Ventura County in the south, looking for a close match to the Mediterranean climate and high pH soils of Château de Beaucastel. In 1989, they purchased a 120-acre parcel twelve miles from the Pacific Ocean in what is now the Adelaida District west of Paso Robles. They named it Tablas Creek Vineyard, after the small creek running through the property.

The property elevation averages 1,500 feet, and the shallow, rocky limestone soils are of the same geologic origin as those at Beaucastel. Summer days are hot and sunny, but the influence of the nearby Pacific cools the nights, and the remarkably Rhône-like Paso Robles climate allows the grapes to mature fully and yet retain crisp acidity. Ample rainfall in the winter allows most of the vineyard to be dry-farmed each year. 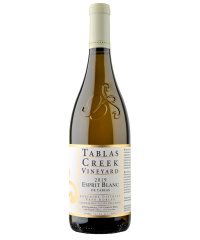 Tablas Creek Vineyard Esprit de Tablas Blanc 2019
Reset Filtr •
Copyright © Californian Wines a.s.  2023. All rights reserved  Ecommerce solutions BINARGON.cz
Cookies + GDPR
CalifornianWines.eu and partners need your consent to the use of individual data so that they can, among other things, show you information about your interests. Click on the "OK" box to give your consent.
Privacy