In the early 1960s the Napa Valley was being reborn as a fine wine region. A fresh wave of pioneers came to the valley to realize their dream of making world-class wines and the Stag’s Leap Wine Cellars founding family was among them. The estate was founded in 1970 with the purchase of Stag’s Leap Vineyard. The Stag’s Leap Wine Cellars winery was built in 1972, the same year the winery released its first vintage of S.L.V. Cabernet Sauvignon. The very next vintage of this wine, crafted from three-year-old vines, made history with resonating effects.

In the early days, the small family-run winery was little known outside the Napa Valley. That changed, however, in 1976 when French wine experts judged, in a blind tasting, that two California wines were as good as, or better than, the best wines of France. In what is now referred to as the historic “Paris Tasting” or “The Judgment of Paris,” the Stag’s Leap Wine Cellars 1973 S.L.V. Cabernet Sauvignon took top honors among the reds, triumphing over two first-growth and other renowned wines of Bordeaux. The surprise win was covered by TIME magazine and picked up by media around the world. The story of The Judgment of Paris brought international recognition to Stag’s Leap Wine Cellars, the Napa Valley and the American wine industry as a whole.

At the same time, the winery was winning attention for another proprietary blend of Cabernet Sauvignon. In 1974, the winemaking team decided that one lot of wine from S.L.V. was so beautiful and distinctive that it should be bottled separately. The wine had been aged in a large wooden cask, number 23 in the lineup, so the bottling was named and labeled CASK 23. Upon release, CASK 23 quickly became a benchmark for California Cabernet Sauvignon.

Twenty years after the Paris Tasting, in the spring of 1996, the Smithsonian Institution created a display documenting the Paris Tasting and the story of wine’s coming of age in North America. The winning red and white wines of the 1976 tasting are now part of the permanent collection in the National Museum of American History. In 2016, Stag’s Leap Wine Cellars celebrated the 40th Anniversary of The Judgment of Paris with events at the Smithsonian, the winery and around the world.

FAY, S.L.V. and CASK 23 comprise Stag’s Leap Wine Cellars’ portfolio of Estate-Grown Cabernet Sauvignons, which are among the most highly regarded and sought after Cabernets in the world. The adjoining vineyards of FAY (purchased in 1986 and named in honor of pioneering grape grower Nathan Fay) and S.L.V. (purchased in 1970) are the heart of the winery and the estate. In 2001, the winery purchased an additional estate vineyard (Danika Ranch) on Big Ranch Road in the Oak Knoll region as a source of beautiful Chardonnay and Sauvignon Blanc.

The winery’s story today is one of renaissance. Since acquiring the winery in the summer of 2007, the historic partnership between Ste. Michelle Wine Estates and the Antinori family of Italy has worked tirelessly to preserve the Stag’s Leap Wine Cellars legacy and to set the bar even higher for the decades to come. The 2008 vintage wines were the first crafted from bud-break to bottle under the partnership. Marcus Notaro was named Winemaker in May 2013. The winery opened the FAY Outlook & Visitor Center to the public in September of 2014, giving guests a spectacular view of the estate vineyards and a tasting experience that matches the world-class wines being produced. 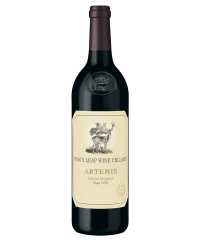 Stag´s Leap Wine Cellars Artemis Cabernet Sauvignon 2018
Reset Filtr •
Copyright © Californian Wines a.s.  2023. All rights reserved  Ecommerce solutions BINARGON.cz
Cookies + GDPR
CalifornianWines.eu and partners need your consent to the use of individual data so that they can, among other things, show you information about your interests. Click on the "OK" box to give your consent.
Privacy